So far it has been a busy week with less time than normal spent in the office. This is the life of a FLO. Some weeks we spend lots of time in the office, other weeks we’re out and about visiting colleagues, museums, finders, coroners and other interested parties. It certainly isn’t a standard office 9 to 5 job. But that is one of the reasons why I like this job so much. That and the wonderful range of finds that I get to see on a regular basis.

Monday: Was a quiet day in the office, as none of my volunteers were in to keep me company. Therefore I spent it, catching up with paperwork and recording finds from a couple of my independent finders. I dealt with a mixture of finds from Roman pottery to Roman coins to post medieval coins. The highlights of the day were: 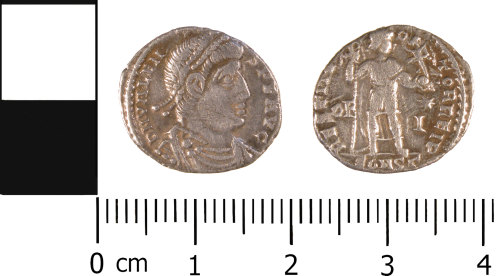 A siliqua of Valens, dated to 25th Feb AD 364 to 24th August AD 367, found in Lincolnshire. This was an interesting coin as siliqua are incredibly rare from Staffordshire, so it is only when the finders detect in other counties that I get to see such nice late roman coins. Normally the only late roman ones I tend to get, I often have to play ‘spot the reverse type’. 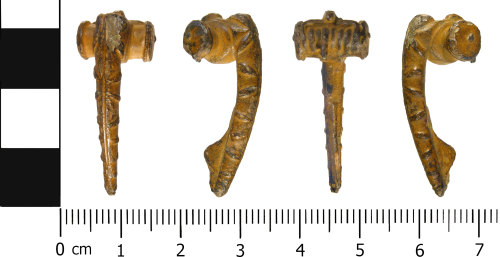 This was the other nice find, a lovely decorated Polden Hill brooch, dating from 75 AD to 175 AD. Polden Hill brooches are relatively common through the West Midlands but often, the bows are not as highly decorative as this example.

Tuesday morning: Was spent in Cannock Coroner’s court as I had been called to be the expert witness for 11 treasure cases that the Potteries Museum & Art Gallery will be acquiring through the Treasure process. All were fairly small cases, and not as internationally important as the ‘Staffordshire Hoard’ (now on display at Birmingham Museum & Art Gallery and the Potteries Museum, with small displays at Tamworth Castle and Lichfield Cathedral). However they are all significant finds for Staffordshire, so it is nice that they will be acquired by a museum so everyone can enjoy looking at them.

Tuesday evening: It was one of my regular club meeting nights. This time, I had the joy of the Coventry Heritage Detector Society. Club meetings are always interesting to attend. I get to find out what the clubs have been up to in between my visits and to see (and borrow) the latest finds to get recorded on the PAS database, and often a cup of tea and a biscuit 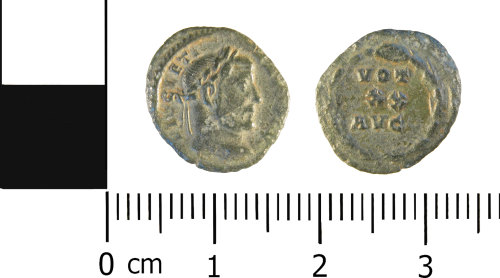 As part of my update to club members, I did mention about an interesting coin found by one of the club members. It was a fraction of a nummus of Diocletan, dating to AD 303. This coin celebrates Diocletian’s vicennalia (i.e. the 20th anniversary of his reign) in September 303. This kind of fractions is extremely rare. Two examples are recorded by Pierre Strauss for Diocletian. One is in now in the Cabinet des Médailles in Paris, the other one was sold at autions in 1954 (sale Münzen und Medallien XIII, 1954, no. 467). Another good example of why all late roman coins or ‘grots’ should be shown to the FLO. You never know what they may turn out to be!

The added bonus to the evening was that I won a homemade ginger cake in the club raffle. It made a lovely change as I normally don’t win anything.

Wednesday: Another day out of the office and the morning was spent dodging rain showers with the County Archaeologist, Stephen Dean, checking over a site for a possible coin hoard. The finder did come out to help with our search, however no hoard was located. The afternoon was spent, drying out and catching up with missed emails from the previous day and that morning.

Thursday: Finally back in the office for the morning and once again had to deal with various emails and catching up with admin paperwork. Mid morning, just after I had made a cup of tea, I had a finder come to visit me to show me a silver ring that he had found, and several horseshoes. All turned out to be fairly modern but during our conversation, it turned out that he regularly fieldwalked a field rich in flint tools. I was able to persuade him that next time he went, to make notes of exactly where he found each tool from, ideally to bag them up individually and then come back and see me in the new year with all of them.

Friday: Back in the office, with company today as I have some of my volunteer team in to give me a hand. My work has been varied as per normal. So far: I’ve chased up local museums for them to express an interest in acquiring a couple of local treasure cases; sorted out monthly statistics for my management on how many finds I have done and how many people I have visited at club meetings; met with two finders, handed back one lot of finds and took in a Middle Bronze Age spearhead; photographed some finds; and even managed to record a couple of finds.

Today, two of my volunteers, Helen & Carl are in. Helen has been working with me for nearly 18 months now and through her volunteer work, she has gained enough experience to get an internship with a neighbouring FLO, Alastair Willis over in Derby. Today she is continuing to work through the finds for the Midlands Metal Detecting club, so they are all ready to hand back to the members in August. For her 600th artefact she has picked the Middle Bronze Age basal looped spearhead that was handed in earlier. She has taken the photographs, and will spend the rest of the day researching it and writing the report on. 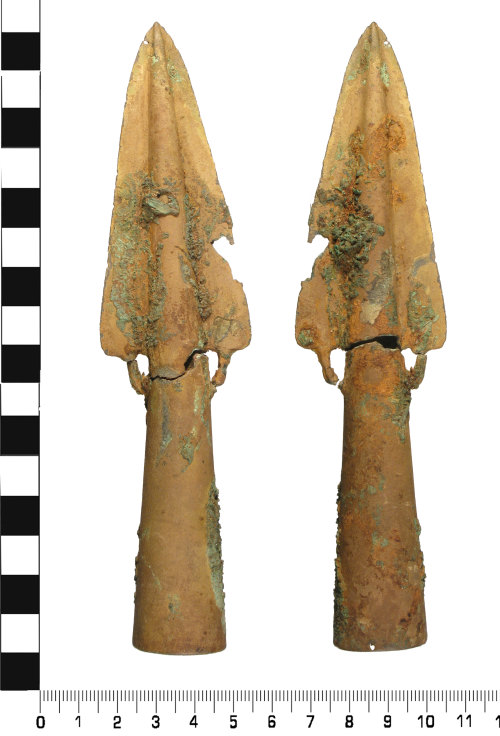 Carl is developing his photography skills by working on 3D images. He is currently sorting out the photomasking of the Severn Valley ware pot from the Shrewsbury Hoard. It is thanks to volunteers like Carl, that we have started being able to take 3D images of finds brought in for recording. 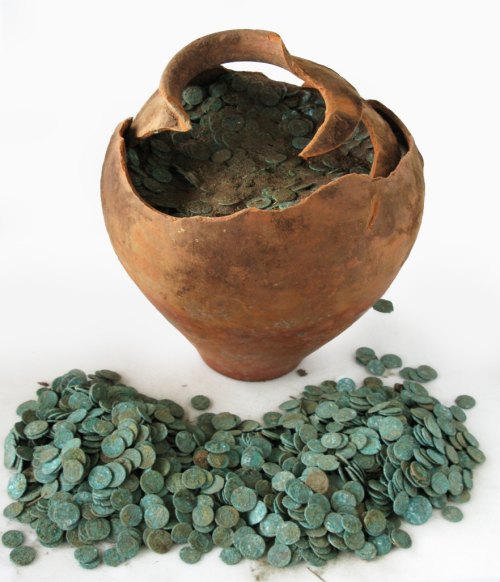 The ‘photomasking’ stage is almost complete, and now we are looking at creating the 3D model using PhotoScan. So far we have done one ‘chunk’, with several more to do, but the point cloud is definitely beginning to resemble a pottery vessel! Excellent Work. Well done Carl.

Point cloud of the Shrewsbury Hoard

The other volunteers on my team are: Claire, Gail and Richard. Both Claire & Gail attended the PASt Explorers Training Day at the British Museum on Monday, which they both enjoyed. When they’re in, like Helen, they help record some of the club finds.

Richard has been helping record some nationally important quartzite handaxes of Lower and / or Middle Palaeolithic dating as part of the ‘Waite Collection’. One of the last times Richard was in, we took some photographs of some of the handaxes so that 3D models can be created of them as well.

Without the assistance of all my wonderful volunteers, we could not do things like 3D models of artefacts but importantly also keep on top of the recording of all the finds that are handed in for recording by all the finders in Staffordshire & the West Midlands. Thanks to all of you.

A day in the life of a Liverpool FLO

The Work of the Ceramics, Glass and Metals Section, British Museum Department of Conservation and Scientific Research

A Week in the Life of a FLO (And Her Helpers)

A week in the life of an FLO

A week in the life of (Shropshire and Herefordshire) FLO

A week with the Hallaton Treasure Project

View all posts by Teresa Gilmore →

Teresa Gilmore has written 1 articles on Day of Archaeology