Still hungover from the team spirit of The Heritage Jam, an archaeology hack-a-thon, Stuart Eve and Colleen Morgan decided to blog in dialogue for the Day of Archaeology.

CM: I wasn’t sure what to expect. Sure, I knew the basic outlines of what a “Jam” should be in the tech/gaming world–everyone comes together to hack on a project together to see what kind of results you can get with very intense focus for a short amount of time–but how would that play out in the world of interpretation and heritage? I just knew that I was excited to finally have a chance to work on something with other visualizers, some of whom I’d known for years. We started out bright and early at 9:00, went through introductions, got an outline of a plan together, then went to York Cemetery to gather primary data.

After a lot of discussion (and an inadvertent stop in a retirement home for lunch), we went to work. Very quickly each of us were able to step into a niche that worked toward a final product. We elaborated on Shawn Graham and Stu Eve’s Historical Friction/Story Whisperer to create a cacophony in a cemetery–geolocated stories emanating from graves that would increase in intensity with the density of burials in different areas. The final product was a website, an app, an interactive map, a short video to show the concept in action and a well-written paradata document. It might have been overkill. Working with a whole team of creatives was an unbelievable rush. We were able to rely on each other for different pieces of work, as well as draw inspiration from the team. We ended up working for 12 hours! 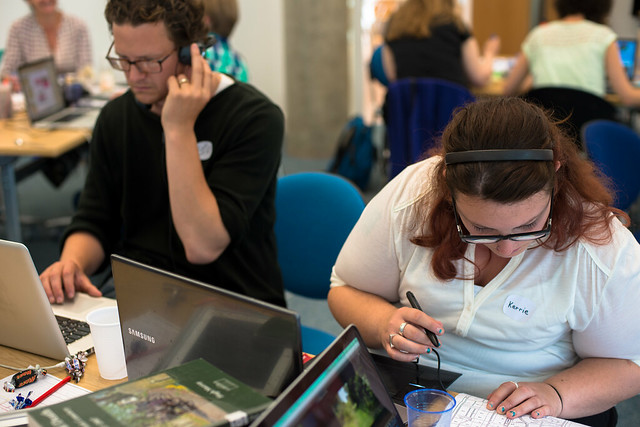 SE: The Jam for me was a refreshing example of ‘doing’. I had heard of ‘hack-a-thons’ or code sprints, where hackers get together and make an app in a day, so it was great to try something similar in archaeology. The real beauty of the day was that each one of our team had discrete skills, and each one of us brought those skills to bear to create something really rather cool. It was frantic, and at one point everyone was huddled around their various computers or drawing tablets working intensely for an hour almost without speaking – but somehow we were all working in concert. At the start of the final hour before submission, everyone started swearing and it looked like we would have nothing, but as is always the way when working with v. talented people when we all swapped our various files, videos and drawings it all fitted together perfectly! It helped that Shawn and I had previously worked on the Historical Friction project, as it meant we started the day with a solid idea to build upon – and could concentrate our efforts on developing the idea and finding out where our skillsets would be useful. The real question for me is where the collaborations and the prototype app goes from here. One of the main problems with hack-a-thons is that the prototype is built, but then all development stops. Hopefully we won’t let that happen with Voices Recognition.

CM:  As Stu says, while it was fantastic to get together and make something, it would be ideal to have funding to develop the ideas further. We are exploring options to that end. It would also be great to partner with an active project or institution who wants their data to be explored and visualized in new ways. I’d really like to make the other film/auditory walk, but who knows when I’ll have time? The Jam did reveal a lot about our individual processes and abilities. I was happy making the film, but when it came to audio editing, I found myself considerably behind the curve. To create the auditory layering, Alexis Pantos and I frantically searched YouTube for potential Creative Commons licensed sources of Northern/Yorkshire accents, male and female and of various ages. Then it came to layering the sound within the film and I absolutely knew there was probably a better way to do it in Final Cut Pro X, but I didn’t have time to learn! So I used the relative brute force of keyframes to try to manipulate the sound. I also appreciated the insights to the workflows of other project members. We would help each other out when we found ourselves at a loose end–Sam Kinchin-Smith would finish writing a narrative, grab another group member to do the voice acting/recording, give the file to me, I’d slam it in the video, get Kerrie Hoffman to geolocate the sound in the cemetery on her interactive map, then repeat! 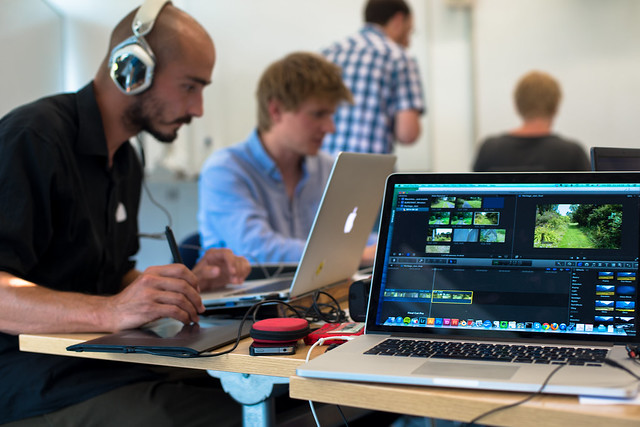 SE: Where Colleen was learning new methods of hacking Final Cut Pro, I was busy wrestling with GIS and javascript – which is often what I do in my day job. The main problem that I had was a lack of data. The burial records were available, but all as PDFs scanned from paper documents and for only a small proportion of the cemetery. We briefly flirted with running them through an OCR program to wrangle them into something useful – but quickly moved on choosing instead to make a hypothetical (read faked-up) dataset to work with. This is one of the unfortunate sides of doing everything fast, is that you are creating an impression of what the final thing would look like – but the back-end data is not always there. However, in the end I spent quite a long time using GIS plugins to create random grave locations and adding fictional data to them. In retrospect, the OCR scanning might have been quicker and more useful in the long run!

I think one of the key parts of the project was to make sure that any of the stories we created for the people buried were based on real data, and Sam did a great job on mining the online census records and literally digging up the facts and figures of the handful of people we had time to research. In the real version this would all have been done programmatically via fancy linked data algorithms (as there are literally thousands of burials) – but Sam’s creative writing background and also the skills of the voice actors really brought it to life.

One other part of the day that really struck me, is that in the ’empty’ areas of the cemetery (those with no headstones) there are actually hundreds of burials. mostly of people who could not afford a grave marker. I wanted our app to highlight this by playing the thousands of voices of those buried in the empty quarters. So you only become aware of the volume of burials by the volume of the voices that are talking when you walk through them. However, we had no idea what these stories would be, what would their voices say? During the discussion afterwards, one of the participants said that by overlapping the voices of the burials we wouldn’t be able to hear the individual stories of the people in the mass burials, but would be privileging the stories of the those buried individually in the mausoleums as there wouldn’t be so many other voices trying to tell their story. Anthony Masington then pointed out that the people who had paid to be buried in an individual mausoleum had already privileged themselves, at first visually by setting their grave apart from the others, and now aurally by enabling their story to be heard in relative silence. It seems we didn’t just make a cool app, we actually created a new way of experiencing and exploring the cemetery and it made me think about it in a different way. Not bad for a day’s hacking! Thanks to the Heritage Jam for a fun and productive day!

Cemeteries and their Living Communities, and Archaeology

ADS at the Center for Digital Heritage Summer School

Heritage and Identity: Setting up a new Public Archaeology project…

Heritage Data and the National Trust for Scotland

View all posts by Colleen_Morgan →

Colleen_Morgan has written 1 articles on Day of Archaeology