Today, I’m working at the Western Washington University archaeology lab, but since I wrote about that for Day of Digital Humanities a few months ago, I thought instead I’d write about the work I do with my company where I create software and tutorials for archaeologists.

9-12pm Worked through a Database Tutorial

This morning I finished up working through the tutorial for FileMaker Pro 12, a database management system (DBMS). I’ve heard great things about Filemaker from other archaeologists who have used it to create custom databases for recording archaeological sites. Compared to some other DBMS, Filemaker’s interface is very simple, and the program has some nice features, like tight integration and easy portability for iOS devices (e.g. iPhones, iPods, iPads) through the FileMaker Go app. This past year, I attended two conferences where several archaeologists demonstrated the Filemaker databases they built for academic projects. In particular, the Center for Digital Archaeology built their impressive Codifi app using FileMaker. Although I’ve yet to hear of any CRM companies who use Filemaker, I think it should work as a short term solution for a friend of mine to use this summer on field projects. In fact, I built a simple relational database for archaeological survey this morning based on the Intermountain Antiquities Computer System (IMACS) and Filemaker made it pretty simple for me to transfer the database to an iPad. 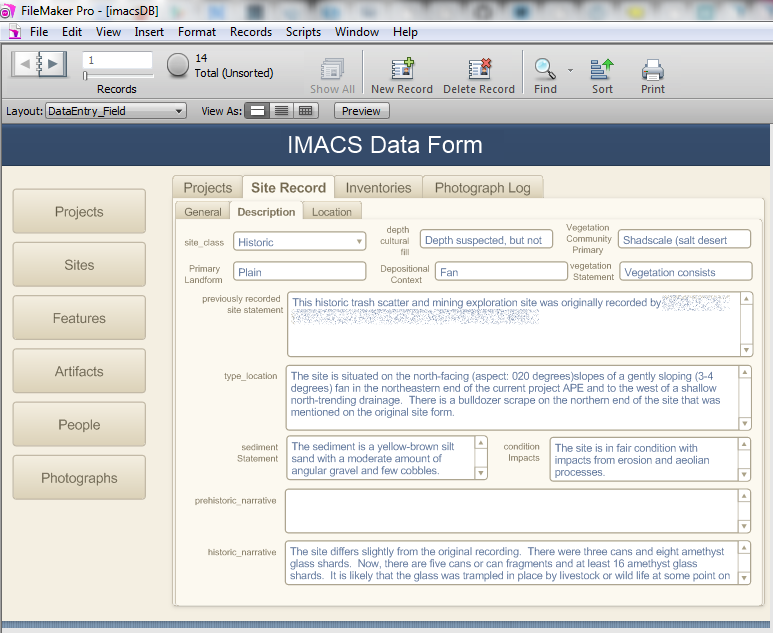 Although Filemaker seems great so far, I’m hesitant to rely on the whims of two different companies, Filemaker and Apple, to ensure that I will be able to access my data when I need it. I interned briefly at Digital Antiquity (the organization that runs the Digital Archaeological Record data repository) and know that archaeologists who trusted their data to propriety database systems regretted it later when the database companies went under, leaving archaeologists with datasets that were difficult to access on new computers that couldn’t run the older database software. If the archaeologists were cautious, they might have translated their databases into less flexible but more stable preservation file formats, like plain-text comma separated value (CSV) files, but in many cases that didn’t happen.  Because of that experience, I always try to ask myself “how can I get data back out of here?” whenever I use a new piece of software.

For the past few months, I’ve also been building a custom archaeology data recording application for mobile devices using the Adobe Cordova/Phonegap framework.

Screens from our data recording application.

The Phonegap framework allows me to use web languages like HTML, CSS, and javascript to create mobile applications that will run on multiple platforms, including iOS, Android, Windows Phone, Blackberry, and webOS. I’m already familiar with these coding languages from building websites and I like the idea of being as platform agnostic as possible. As an added plus, if my partner and I decide to make the application open-source, other archaeologists will be able to edit and customize the code more easily than if we wrote the app in C or Java. Phonegap and HTML5 do have their limitations though, so in case we run into issues that slow our app down too much to make it useful, we’re also looking into porting the app to native code. For now though, Phonegap allows us to quickly prototype the application using languages we’re familiar with.

1-3pm Videoconference with Chris at DigTech 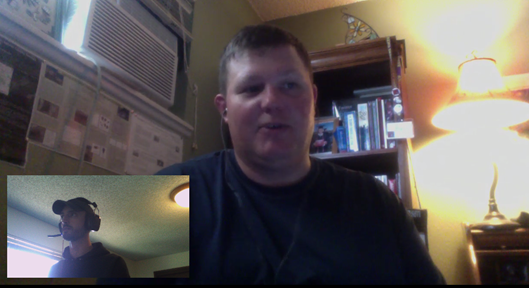 I’m working on the PhoneGap application with Chris Webster of DigTech, LLC. Chris is a long-time shovelbum, project manager, and podcaster who recently started his own cultural resource management (CRM) archaeology company. Chris wants to do as much of his site recording digitally as possible in order to increase efficiency and data accuracy, spend less of his clients’ money, and free up his archaeologists’ time to do more research, analysis, and publication rather than data-entry. Chris has accomplished a lot of this by using various off-the-shelf applications like Tapforms and MementoDatabase, but decided that none of them were doing everything he wanted or needed to do for CRM archaeology.

Chris and I meet weekly to discuss projects and to collaborate on the application. Chris primarily works on the interface design: making sure that the app is useful in field situations, with large enough buttons, text, and easy access to vital data. I primarily handle the coding and database design, but Chris and I have also been challenging each other to learn more about computer programming as we go. Simply designing a database to hold archaeological data has forced us to carefully consider and try to anticipate the different needs an archaeologist might have for a database in the field: if sites can contain features and artifacts, but features can also contain artifacts, how do you map that relationship? How many controlled terms for material types do you need to offer to standardize and streamline recording without limiting an archaeologist’s ability to add in an unexpected material type? Others have put much more thought into this area, but the end goal is to design databases that are specific enough to increase efficiency and accuracy while being general enough to compare data across sites, archaeologists, and regions. For Chris and I though, it’s been useful mental exercise to think about these kinds of problems as we program.

Recently the app has started to resemble something that would be useful out in the field, but we still have a lot of work to do. Some of the field situations we need to adapt our app to handle are to expand beyond simple survey to being able to quickly and efficiently record rock art. We have a database up and working in the app and have tested recording coordinates using the mobile device’s internal GPS (it’s nowhere near submeter accuracy, but it’s still handy), but we’d also like to add in some other features, like simple mapping, storing photographs, and making the data exporting work more easily.

3-4pm Wrote an email to a programmer to collect bids on fleshing out the application.

Because neither Chris nor I are professional programmers, we’re contacting several people who are to see what they might charge to help us add features. We’re not sure yet whether we’ll fund that ourselves, release a beta version to fund further development, or seek funding through a crowdfunding website like Kickstarter. If you’re an experienced programmer, we’d love to talk to you. You can contact us through our websites or at russell[at]diachronicdesign.com or chriswebster[at]digtech-llc.com

4-6pm Geeked out with other archaeologists over a new toy

A few other archaeologists and I have been eagerly awaiting a low-cost tablet with both an internal GPS and a >3mp camera that we can use for field recording. Today, Google announced the new version of their Nexus 7 tablet which met our requirements. I’ve been waiting awhile for that right combination of specs, so I bit the bullet and bought one. I’m really excited the Nexus 7 runs on android 4.3, which means I can finally run the FAIMS application on a real device; up until now I’ve had to emulate a Nexus 7 on my laptop, which is not ideal. From their website: “The Federated Archaeological Information Management System (FAIMS) Project is funded by the National eResearch Collaboration Tools and Resources (NeCTAR) program[…] an Australian Government program to build new infrastructure for Australian researchers.” The researchers at the University of New South Wales and elsewhere have specifically designed for CRM data collection in Australia. I’ve been interested in the FAIMS project since speaking with Dr. Sobotkova at the 2012 SAA meeting in Sacramento and was very impressed when Dr. Crook showed me the progress they made when I saw FAIMS’s booth at the 2013 SAA meeting in Honolulu. The FAIMS project has open-sourced their app, which I love, and a friend and I want to customize the app for an excavation project here in the United States. Now that I will have a new android device, I can finally move forward with playing with the app and (hopefully) pay things back by contributing some code or tutorials back to the project.

If you couldn’t tell already, I’m generally pretty hopeful that technologies like databases, mobile devices, internet blogs, and social networks can help archaeologists record, analyze, and publish about archaeological sites more quickly, sustainability, and openly.  I’m excited about all the other posts I’ve seen on Day of Archaeology today that involved everyone from academic archaeologists to CRM archaeologists, community members, students, authors, and more. I hope this post has been interesting and helped add to the diversity of the voices on this blog. I’m looking forward to reading more posts and can’t wait until Day of Archaeology comes back around next year.

The Archaeology Data Service, Working to Keep Your Bits in Good Order

A day with the Archaeology Data Service

Russell Alleen-Willems is an applied archaeologist working in the western United States. Russell specializes in digital archaeology; especially archiving and disseminating digital archaeological information and creating and teaching folks how to use archaeological software. Russell pursues the latter through his company Diachronic Design. Check out some of the available software tutorials and feel free to request new tutorials (http://www.diachronicdesign.com/tutorials.php)! Twitter: @Mjstrwy , @DiachronicD View all posts by Russell Alleen-Willems →

Russell Alleen-Willems has written 2 articles on Day of Archaeology