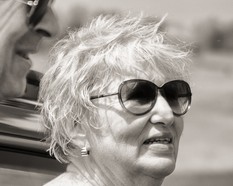 Dr. Lynne Goldstein: This summer’s archaeology was a little different for me. In addition to the MSU Campus Archaeology Program that I direct, I also directed an archaeology field school project at the prehistoric Aztalan site in southern Wisconsin (blog posts can be found here). Both kinds of archaeology are exciting, but trying to keep track of both when they are in different places (and different states) is tricky. As you will read below, the CAP group found lots of things in the excavations that were done as large-scale construction proceeds across campus. A very exciting moment for me was when I discovered that all of the various University offices with which we work are finally understanding that what we do is important and must be accommodated. We no longer have to argue with folks about our presence. We still have to negotiate access and timing, but that is only because of construction deadlines. I am exceptionally pleased that CAP has come so far and has been so successful in such a relatively short period of time.

Excavating at Aztalan was also very exciting and interesting. Aztalan is a palisaded village that dates to the Mississippian period (roughly AD 1000-1300), and is now a state park. We were looking at two different structures at the site, trying to figure out how they were used, and how the people at Aztalan modified their landscape. We found lots of artifacts and discovered that some of the assumptions that had been made about the site are not quite correct. See our blog posts for some details, and also visit Dan Seurer’s website that has wonderful pictures of our work.

I would not recommend that people try and organize and direct two separate archaeological field projects in the same summer, but we had wonderful crews, and with a lot of help, we were successful in both projects. Sometimes people tell me that they cannot get excited about “historic archaeology” or “prehistoric archaeology,” but I have never quite understood those views. Archaeology is always exciting – you are the first person to see, touch, brush, move some object that has not been touched in many hundreds or thousands of years – how can that NOT be exciting? Below is a shot of the Aztalan crew – we had an awful lot of rain this summer!! 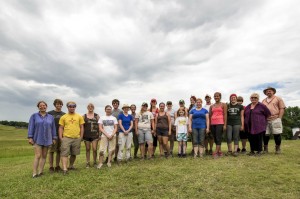 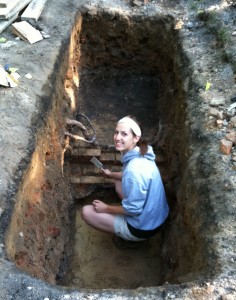 Katy Meyers: I really love working with Campus Archaeology, so it is difficult to select a favorite moment. This summer we’ve made a lot of great finds, surveyed a variety of areas, and had an amazing team to do it all with. One of the days that sticks out most for me was when we were excavating a trench within Saints’ Rest. We had been digging the same 3 by 1 meter area for two days and had found hundreds of bricks and mortar. It was extremely difficult and very slow work. We weren’t sure if we should continue, but I decided that we should press on. At the end of the second day we were well rewarded for our patience. Almost 1 meter deep, we found a plaster floor, portions of an intact brick wall, a stove oven door, all the hardware for a door, and a clear division within the trench between the raised hallway and sand floor basement. The best part of it all was probably that the team working with me on this feature was so dedicated to finishing it before the day ended that we all stayed a few hours past ‘quitting time’. It was fantastic to be rewarded for our hard work, and this feature adds to our understanding of Saints Rest. 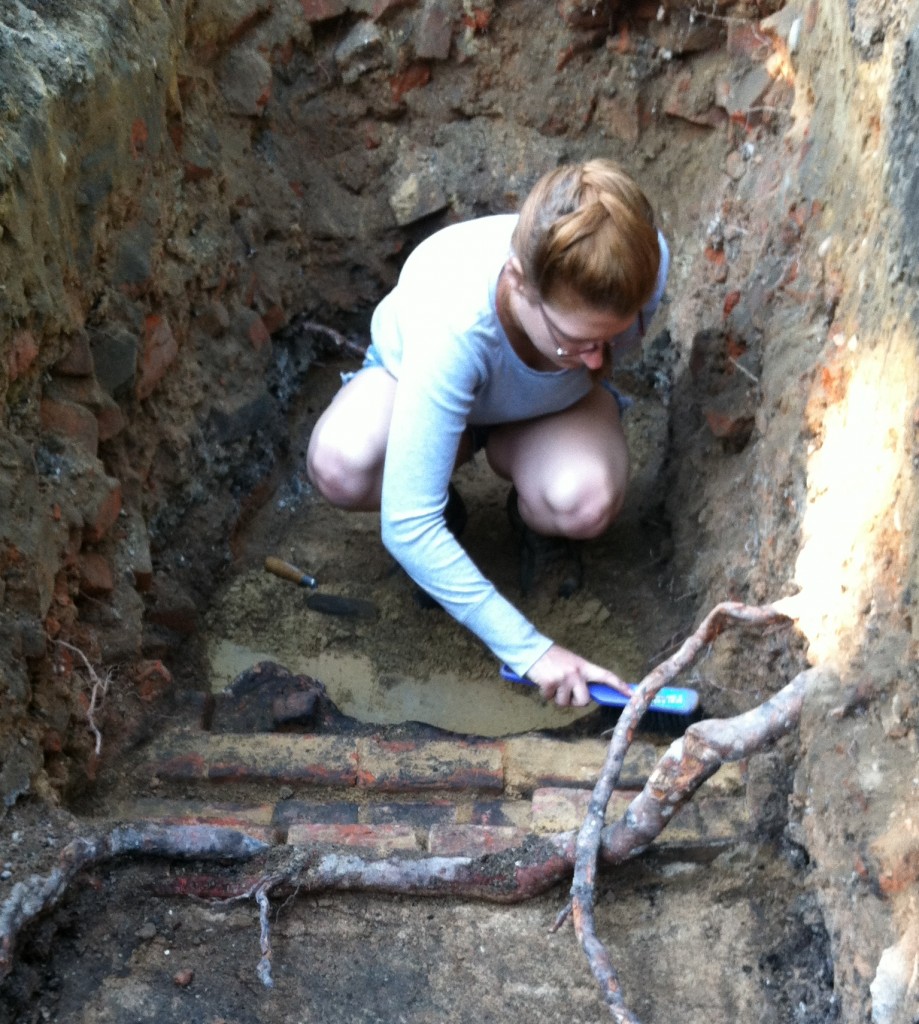 Katie working on a trench near Saints’ Rest, via Katy Meyers

Katie Scharra: This summer has been a whirlwind of construction monitoring, digging, and labwork.  It is hard to choose a favorite moment.  Having been a dedicated lab rat for almost all my archaeological career, I have to say my very favorite moments had to do with the analysis phase of surveys and excavations.  Of all the artifacts, one in particular struck my interest.  A small centimeter sherd of ironstone that  was a small portion of a maker’s mark.  Maker’s marks are found on the underside of ceramics; like trademarks they can tell you a lot about who, where, and when the item originated from.  This allowed us to have an engaging and successful session of identification. To identify this marker’s mark, we had to first figure out its correct orientation.  Once that was done we noticed that there was the paw and mane of a lion.  To indentify this we utilized reference books on maker’s marks and Google images.  This allowed us to discover the company that produced the product was Royal Ironstone China, a company in England made up of multiple potters.  Further inquiry led to a match of potter and a subsequent dating of the artifact.  A blog post on the specifics of this search will be posted in the next few weeks. 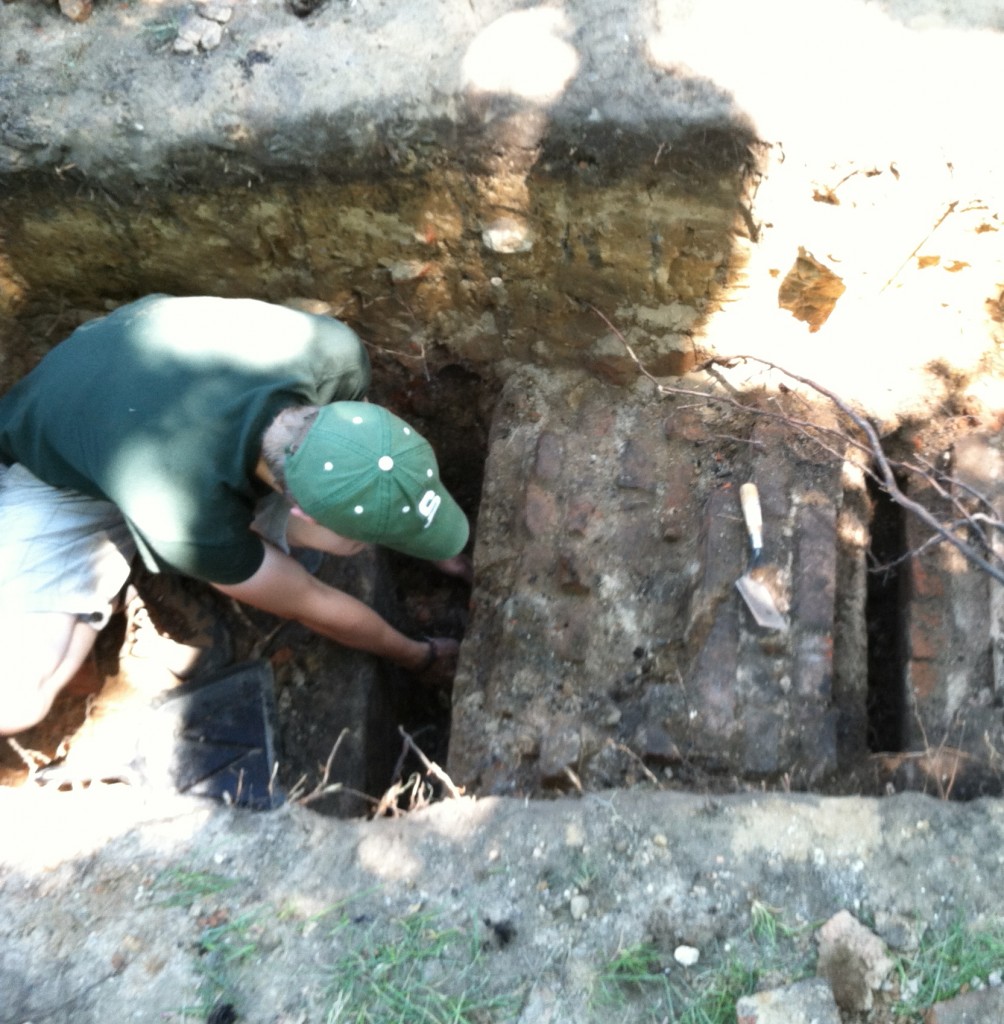 Josh cleaning up the chimney found at Saints Rest, via Katy Meyers

Josh Schnell: This summer working with Campus Archaeology has taught me so much as this was my first actual archaeological field experience. One of the most memorable projects we did this summer was the dig at Saints Rest. The sidewalk construction crew was putting in a new sidewalk that happened to run straight through Saints Rest and we ended up putting two trenches in the area where they were going to be paving. The dig itself yielded a bunch of artifacts and gave us more information on the building, including the location of one of the chimneys. We pulled up a doorknob, some hinges, and a stove door from the trench located inside the building, and from the other trench I actually pulled up quite a few great artifacts. Aside from a large piece of Rockinghamware (a type of stoneware) from a shovel test pit near the trench, I pulled a spoon head out of the ground and later found the other half! We also found large portions of bottles, metal, and tons of glass and whiteware pieces. It was the longest dig we did this summer, but my own discoveries were what made this dig so memorable for me! Bethany Slon: My favorite part of working with Campus Archaeology this summer was definitely uncovering the old road outside of what is now the MSU museum.  Today, the north side of the MSU Museum has a sidewalk running roughly parallel to the building, with grassy lawn on either side.  However, in the late 19th century, this area looked completely different.  At this time, Williams Hall stood there instead of the MSU Museum (later to burn down in 1919).  We know from research at the MSU Archives that a road used to run on the north side of Williams, passing by the water fountain slightly to the east of Williams (the same water fountain that remains on campus today).  In May we opened up a trench just outside of the MSU Museum, and were excited to find a layer that was clearly the old road.  Architecture has always been one of my favorite aspects of archaeology, so finding this road and relating it to the old buildings and campus features was extremely enjoyable for me.

Digging and Discovering … on Campus

A Day in the Life of Bones Don’t Lie

View all posts by michigan →

michigan has written 7 articles on Day of Archaeology