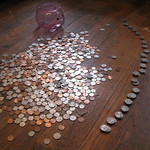 I had hoped that on this Day of Archaeology I’d be able to report to you from the field.

I had hoped I’d be able to tell you about a fantastic project that would be using augmented reality to understand something of the cognitive landscape of the Roman world, of how sound helped structure and order space in the landscape outside of Rome.

I had hoped to be sitting in a Roman bar typing this, frankly, rather than from the dreary fly-specked suburbs of southern Ottawa.

Alas, some things are not to be. There were 438 applications to the Social Sciences and Humanities Research Council of Canada for archaeological funding, of which 97 received some coin. I’m sure they’re all excellent projects. Actually, they’d have to be because my scores were:

The lower the final score, the higher up the results you’d get. There are three categories of result: 4 (which means: funded!) 4a (which means: close but no cigar but if anybody drops dead, you might move up the list) and then the rest of us. So even if I had had two Very Goods and a Good I’d still be only on the reserve list.

To get the funding, you have to be Excellent on every axis. Practically Perfect in Every Way.

On the one hand, this is a good thing. You only want the best, path-breaking, important research ideas to get a kick at the can when there’s only so many dollars to go around. On the other hand, it’s a bit frustrating, given the amount of time we all spend every year writing grant proposals (I reckon at least a month of otherwise productive research time goes to writing grant proposals, annually).

I can’t imagine it’s a cakewalk either for our peers who sit on the annual committees. I don’t envy them that job in the least. But if I can take any lesson from this year’s competition, it’s that I need to get out more. They release the names of everyone who sat on the various committees every year; it would probably be a good move for me to start attending more Canadian archaeology conferences (for Canadian, as opposed to say, Roman, archaeology rather than a conference happening in Canada) so that I become more of a known quantity within this country. If you can’t be perfect, being better known might get you over the hump.

At least, that’s my theory for now.

So, on this Day of Archaeology, I’m ruminating on other ways I can obtain the funding that would let me return to the field.

And then the battery ran out..

writing about fieldwork not as fun as fieldwork

An Interlude About a Roman Lead Scroll

Once a Romanist, now Associate Professor of Digital Humanities, Dept of History, Carleton U http://twitter.com/electricarchaeo http://carleton-ca.academia.edu/SMGraham View all posts by Shawn Graham →

Shawn Graham has written 11 articles on Day of Archaeology