Llantarnam Abbey (one for the students)

D’ya know, I should never be surprised anymore?

This is the third year of The Day of Archaeology and each year I actually blog on what I do for the day – on that particular day. I don’t explain my work in a museum, explain my past or most recent archaeological research, nor do I blog my perception on what this day is actually about. All I know is  The Day of Archaeology is about our heritage, it is a shared thing world wide, and one that we can all grasp in one way or another. And it is important for various reasons that not need to be explained here.

For the last four years I have undertaken a landscape study of a Cistercian Abbey in south east Wales. The abbey has an interesting ‘historical identity’ that is latched onto by some in academia and the public alike. It was small, skint and had no  real impact on its surrounding landscape. It can be waved away with a flutter  of the archaeological hand coupled with a muttering of  ‘So what? It is Llantarnam’. It does not help that the grounds of the abbey happened to end up within the boundary of  a post WWII New-town where every thing had to be ‘new’. No watching briefs, no excavations and the general dearth of historical research was sadly wanton. The lack of serious investigation into its archaeological value should be a wake up to us all.

Instead of embroiling myself into the political crapness that is archaeology in the Eastern Valley in Torfaen (Gwent or Monmouthshire in old speak), let us have a look at what that particular order is renowned for within their immediate land holdings. It is water management.

Now that is boring to a lot of people but there is no need for such disdain. If you follow the systems, you find archaeological remains. It is a simple concept. And I don’t mean walking on banks next to, or along,  leats, streams or rivers either. The world, and his archaeological brother and sister, has done that already. If you want to investigate water systems, the best way to do that is actually get in the systems and walk down (or up) them. It is then, and only then, that you can visibly investigate and find some serious archaeological remains.

Last summer was earmarked for the recording of such findings. It didn’t happen due to a few broken and dislocated bones. This year it has happened, and I am quite happy to admit my pleasant surprise at what has been uncovered. What you are about to see is why I have no more surprise while doing this stuff. It is all rather big.

You can go from this:- 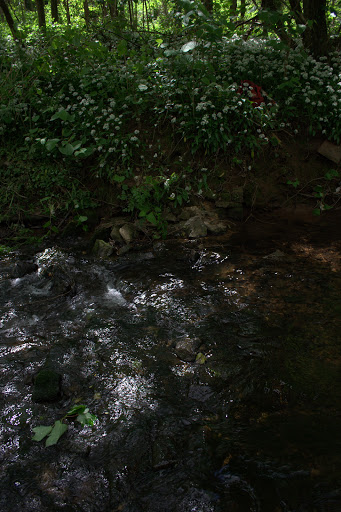 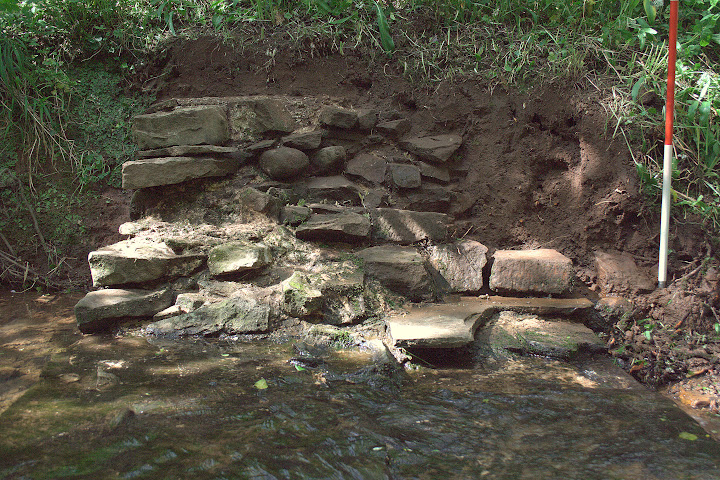 And that is quite exciting when you consider nothing has been recorded in this particular landscape.

For The Day of Archaeology  2013 I looked at this feature which I thought was small (again), much to my incompetent (still) thought. It is a sluice gate within the grounds of Llantarnam Abbey.

Again, you can go from this:- 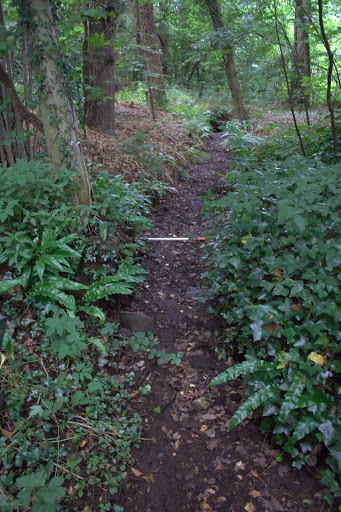 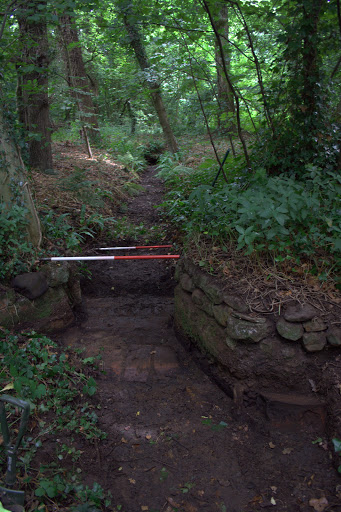 I consider this sort of investigation to be of a semi-invasive nature. Without doubt the remains that are visible are multi-period and only a serious, long term, archaeological investigation will let us all understand the exact nature of the remains. Cistercian water management appears to get a bad press from many areas. There is no need for that whatsoever. When you understand these old systems, it can lead to solving many flooding problems that cause so much heartbreak today. As they are no longer managed, they flood in a considerable manner. This is a school route next to a mismanaged historical water system. 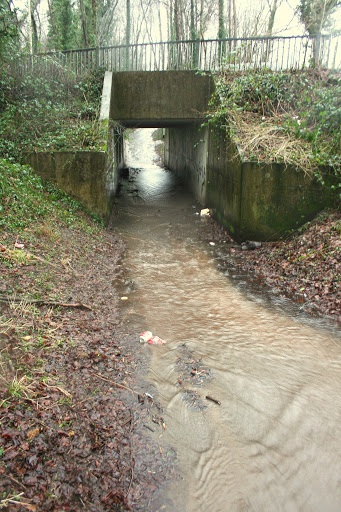 For my last note, I have to point out to everybody the health and safety aspect of this sort of study, it is very dangerous. Many historical water systems are still in use today. Storm water, street drainage and road run off are directed into current systems that had a successful, but managed use, many years ago.

You really do not want to get caught up in this sort of stuff. Be careful people, be careful… 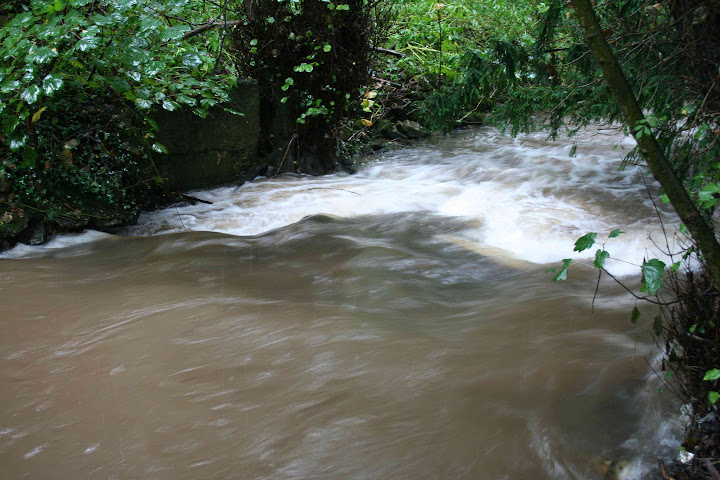 Students and Teaching and Archives, Oh My…

Winning Students Over, One Artefact At A Time

Supporting students in the field

Checking in on students

A Day in the Life of an Investigator for the RCAHMW

Spreadsheets, Guidebooks and That Cake With The Sprinkles

In 2011 I gave up nearly two months of my life on three large community excavations. For free. Zilch. Nowt. Nothing. In fact it has actually cost me a lot of money to be involved. I often get asked why. Before I get the chance to answer, the interrogator normally smiles while pipeing up their own pre-conceived thought on the matter. It goes along the lines of, “Ah, you love doing that stuff don’t you?”

They are right of course, I do enjoy it, I would not do it otherwise. But there is another reason behind my apparent madness. I am a student at the University of Wales Newport Caerleon campus. I am studying for a MA in Regional History and a lot of the course is based on historical landscape interpretation. Quite simply, it is landscape archaeology in another guise. And I enjoy it, immensely. The reasons behind this are multiple. For starters the study is non-invasive, as such no archaeology is destroyed; it is cheap –  it costs me nothing to walk for hours using my eyes while taking notes and photographs; it is important to me that every available means of non invasive information is gleaned from my site of study prior to any possible excavation; lastly, and not by any means should this be last on my list, I have been blessed with tutors who have an active interest in my chosen area of study. That is probably the most important cog behind this. The advice and guidance is, quite simply, second to none.

That is why I volunteer on excavation projects! If my non invasive study is successful, and I see no reason why it shouldn’t be, then the next logical step is to put together an achievable excavation strategy. And it excites me.

The first community project I was involved with in 2011 was the Caerleon ‘Lost City Excavations’ which strangely enough, were in Caerleon. The excavations came about through a geophysical survey undertaken as part of their studies. Led by Dr Pete Guest of the Cardiff School of History Archaeology and Religion, based within Cardiff University. I probably gained more experience from that excavation than any other. It was invaluable.

The recently discovered port wall on the banks of the river Usk, Caerleon.

Next up was a CADW organised excavation at Tinkinswood in Glamorgan. This lasted for two weeks. Yet again, I was fortunate to glean a lot of information on how a community excavation should be run. The site held this amazing atmospheric feel that made you tingle at times. It is hard to put a reason behind this, but it did. It is an Early Neolithic structure and it is pleasing to announce that all of the questions behind the reasons for excavation were more or less answered. Seeing as the first excavations were carried out there in the early 20C, the incredible amount of finds indicates that there should be no reason to excavate further for some considerable time to come. One of the best things things about this excavation came about through the late winter sunsets that we had chance to witness.

A setting sun at Tinkinswood. It really was a magical setting.

The last community excavation I was involved in was St Lythans. Quite lterally, just down the road from Tinkinswood. Another Neolithic structure, this site had not been excavated before. Once again, I was fortunate to learn from the role of a volunteer looking in towards how the site was run. Towards the end of the excavation I was negated to open a trench away from the main investigation. It was wet, cold and uncomfortable, but Tom and I just got on with it, while listening to the squeals of delight while the other volunteers excavated finds near to the structure.

I am on the left of the picture as you look at it. Sometimes it is just better to get on with what you are asked to do…

So, what has this got to do with the Day of Archaeology 2012? Quite simply I always keep a photographic diary of my exploits, as such I was able to deliver a talk this afternoon on volunteering in the archaeological sector at Pontypool Museum. I did not beat around the bush and it went down well.

Good luck everybody, I hope you enjoyed my blog.

getting ready for excavation

2. Getting started in Archaeology: volunteering and studying as a part-time mature student

Inspiring a community in the heart of a World Heritage Site: Community Archaeology in the Ironbridge Gorge

Randall Manor Calling! An update from our Community Archaeology Excavation in Kent, 2013