Another typical day: a bit of everything

My day started as the clock struck midnight and an email conversation started mid-evening continued into the early hours.

I had been searching for the ‘footprint’ of the well-known author of Historia Ecclesiae and many other worthy tomes, known to us as Eusebius of Caesarea. I treat ancient texts as artefacts, an approach that seems to puzzle many historians. Though a number of scholars, some quite eminent, have questioned the veracity, or accuracy of this Eusebius (the name is quite common in antiquity, which is why this one is usually distinguished with of Caesarea or Pamphili), my opening approach is more simple: did he exist?

Having checked the literature and texts back as far as I could, I still could find no ‘footprint’, so asked a number of libraries and specialists. At around midnight, one responded and with three potential leads, the most promising being a possible discovery of a papyrus in Egypt. Undeterred by night, I began immediately to try and track it down.

The morning sun awoke me and again, there were emails from my transatlantic and antipodean colleagues, with papers for me to study and questions to answer. After maybe two hours, I was outside eating breakfast, with laptop for company. Today’s the day and I have to think about what to write here.

I missed a teleconference in order to get to a local dig, where I had been asked to take a look at a cavity which had opened unexpectedly. I did look and also felt around underground, as far as my arm would reach. Big and apparently empty. I advised to be careful not to break the surface, step in and twist an ankle. It’s being examined now.

Though my particular interest is panhellenism in classical antiquity, which draws my attention to sites from the Indus (Greco-India) to the Nile, I am also involved with local sites.

The Deputy Major of Dover recently unveiled the newly finished Wolverton Case at the Astor College for the Arts Dover. This unique Anglo-Saxon display case will serve as an educational tool in the community for schools in the Dover District. The site of the newly discovered Anglo-Saxon cemetery lies at the northeastern end of the 7km long valley between Folkestone and Dover and is situated above the Nailbourne River at the point where the river flows into Kearsney Abbey then onwards via the river Dour through Dover.

A few years ago, I surveyed a hill near Wolverton and since then, taken part in excavations there and further surveying. It’s become quite a big, community project and also a training site. We also have metal detectorists from a local club working with us. Summer weekends see quite a lot of people there, of all ages. There are Bronze Age barrows, an Anglo-Saxon cemetery and masses of worked flints. I like the site for all sorts of reasons, but mainly because it offers a continuous history of the island people I love most.

Now the evening approaches, I am working on cartography, making a map. I am trying to identify the many headwaters of the Euphrates and see if (and how) they relate to baptising cults. 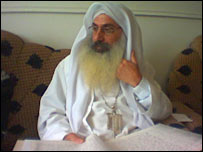 Kanzfra Sattar is one of only five Mandaean bishops left. BBC News.

One of the better known today is known as the Mandaeans:

Mandaeans appear to have settled in northern Mesopotamia, but the religion has been practised primarily around the lower Karun, Euphrates and Tigris and the rivers that surround the Shatt-al-Arab waterway, part of southern Iraq and Khuzestan Province in Iran. There are thought to be between 60,000 and 70,000 Mandaeans worldwide, and until the 2003 Iraq war, almost all of them lived in Iraq. Many Mandaean Iraqis have since fled their country (as have many other Iraqis) because of the turmoil of the war and terrorism. By 2007, the population of Mandaeans in Iraq had fallen to approximately 5,000. Most Mandaean Iraqis have sought refuge in Iran with the fellow Mandaeans there. Others have moved to northern Iraq. There has been a much smaller influx into Syria and Jordan, with smaller populations in Sweden, Australia, the United States, and other Western countries.

Yazidis on the mountain of Sinjar, Iraq/Syrian border, 1920s.

Another sect is the Yazidi, members of a Kurdish religion with ancient Indo-Iranian roots, primarily a Kurdish-speaking people living in the Mosul region of northern Iraq, with additional communities in Transcaucasia, Armenia, Turkey, and Syria in decline since the 1990s – their members emigrating to Europe, especially to Germany. Yazdanism blends elements of Mithraism, pre-Islamic Mesopotamian religious traditions, Christianity and Islam. Their principal holy site is in Lalish, northeast of Mosul. (Wikipedia)

Those whose place of origin lies within easy reach of the Yazidi religious center Lalish (Pers. Lāleš, in present-day Iraq) tend to use the translation “baptism” for the ceremony of mor kirin, which in fact shows similarities to Christian baptism. This ceremony should ideally take place at Lalish, since water from the holy Kaniya Spî (White Spring) or the only slightly less holy Zimzim spring must be used. (Initiation in Yazidism)

To me, archaeology is not divorced from the past. We today are a part of our own cultural layer, just one more atop many earlier.

Definitely Not a Typical Day For Me!

Louise Davies: Not a typical archaeologist

Typical day in our Museum

The pirate flag flying from the window of no. 41 Russell Square