It's that time again! Third year of my #dayofarch posts... if you're dying to see how they've changed over the years, have a look at 2011 (augmented reality!) and 2012 ( i reveal myself to be the tooth fairy)...

Really, I work at the Natural History Museum in London (and tweet at @brennawalks / blog at passiminpassing.co.uk ). And if you didn’t already know, I’m part of the collective Tumblr of awesome that is Trowelblazers ( @trowelblazers). We get all excited about inspirational female pioneers in the trowel-blazing arts 🙂 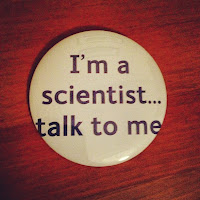 Meh. Up to your hips in muddy water in February, more like it. That’s why I went and got myself a speciality….

Yes. I am a living, breathing example of the incredibly rare animal… the Dental Anthropologist. And yes, that’s a real thing. 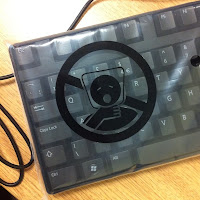 What do I do? Well… today, I’m hashing out some code that will preform a simple spatial analysis that will tell me about the distribution of different types of tissue on a thin section of a tooth.

Before I could even get to this stage, however, there was a long and laborious process of making histological thin sections, digitally scanning histological slides, and then digitising lots of information from the tooth. But the end result will be that I will know to the day the ins and outs of someone’s childhood – growth faltering, chemical composition changes, and a host of other things that we can find out in the lab.

So why teeth? A few reasons:

1. Teeth don’t remodel. You grow ’em once, and you’re stuck with them.

With the rest of your skeleton, remodelling can hide traces of past events — if you broke your arm as a child, you might not ever know from looking at your adult skeleton. Whereas everything that happens to your teeth as they are growing is crystalised right at the moment, leaving an unedited record of the time when your teeth were developing.

2. Teeth grow in a very regular pattern. Like tree rings. 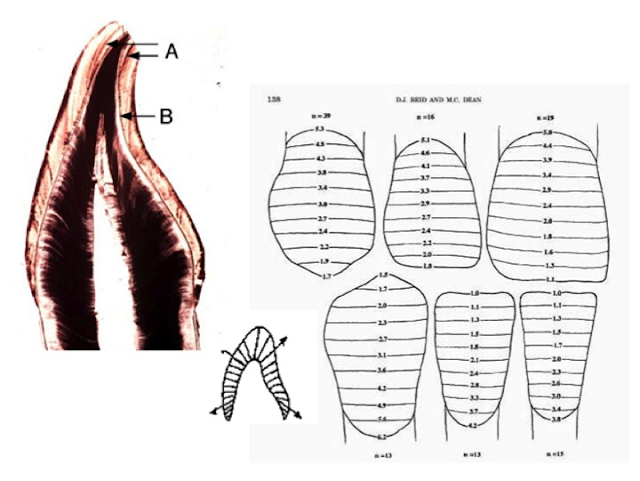 Because teeth are so regular, we know exactly which bits are forming when. So if something happens to a kid, like a bad fever or a period of starvation, that disrupts normal development, we can work out exactly when it happened. Take a look at these lines, left on a tooth from when the individual was so sick that growth stopped for a time. If we magnify it in a scanning electron microscope, we can work out how old the kid was in days when growth stopped: 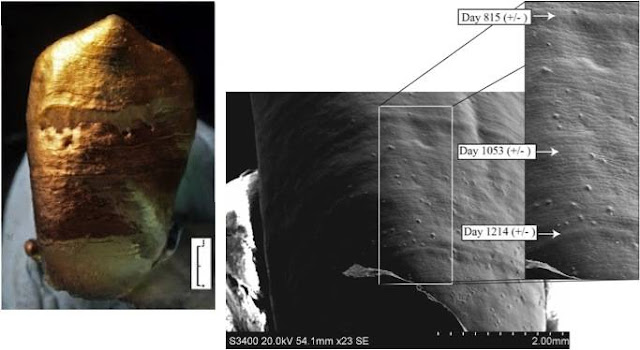 That’s fairly impressive for a kid who has been dead for almost 200 years!
3. Everybody Teethes
Almost everyone has teeth! Teeth usually survive really well in archaeological sites because they are heavily mineralised – sometimes they are the only part of a skeleton left. In my current work, I look at both the teeth from modern humans (super modern. Like, the subjects are still alive) and the teeth from children who died nearly ten thousand years ago a continent away in Central Anatolia.
Actually, I’m gearing up now to leave for the field to go and take some casts of teeth of children who lived at the site of Aşıklı Höyük right when people were sorting out that whole ‘to-setttle-down-and-farm-or-not-to-settle-down-and-farm’ question. The casting itself is a funny process, normally used by dentists, but turns out archaeologists can adapt just about anything…

Behind the Scenes at the Museum

Dusty Muddy Stuff (“I think you will find its called Archaeological Mateeeeriaaal!”)

A different kind of digging

So, now you know. The Tooth Fairy is an archaeologist.

Archaeologists get everywhere. Like sand. This also applies to  jobs, so it’s not totally impossible that someone who specialises in the minute structures of teeth (see my previous post from DayofArch 2011) would end up in the overwhelmingly awesome Human Origins Research Group at the Natural History Museum, London.

For starters, this is an awesome place to work. Yesterday I found out that during WWII, the collections were evacuated to stately homes across the country to escape the Blitz… complete with associated researchers. And there’s a basement here that’s really a bomb shelter which was used by Churchill as a telephone exchange – part of the secret tunnels which run all under this area up to the Palace and War Rooms. Herman Hess apparently even spent a few nights in the Anthro Stores before his trial.

And today, on the Day of Archaeology, this particular Tooth Fairy is gearing up for more research than you can shake a stick at. In relation to the main project I work on at the NHM I’ve:

discovered a disturbing image mode setting on the new camera.

I’m also getting ready to go out to the field to look at the teeth of children who died in central Anatolia (Turkey) sometime between 10,500-8,500 years ago.  These are the remains of subadults from the amazing site of Aşıklı Höyük, the earliest settlement of the Anatolian Plateau.

I’ll be looking at the microscopic records of growth captured on every tooth–perikymata–to see how these children lived and grew. Like tree-rings, the lines on the outside of our teeth give a lot of information on how we grew (here‘s a more in-depth explanation). It’s a way to find out about health and development in early childhood at the very beginning of human settlement. Were there lots of growth disruptions? Can we see records of illness that might suggest seasonal diseases related to shifting subsistence patterns? That tell us about birth spacing?

I’m excited to find out. Even if I will totally get green dental impression material all over my nice new lab coat. It’s the price you pay for science!

Anyway, my days are pretty varied, but you can certainly keep up with me @brennawalks, or follow @ah_arkeoloji for more on Aşıklı Höyük.

N.B. All opinions etc. are my own, and do not necessarily reflect those of my benevolent employer. Images under creative commons fair use.

Behind the scenes at the Natural History Museum London

Counted Out and Counted In

Just finished recording a juvenile skeleton with lovely skeletal preservation, which meant a range of pathological changes were clear. The most obvious change was destruction of the bone at the base of the tooth root for the second deciduous molar in the mandible, with the bone destruction surrounded by a layer of porous new bone formation. The tooth crown had been destroyed by caries (cavity) and it seems likely that a secondary bacterial infection had developed into an abscess, which had drained into the surrounding gums. This is quite a severe change considering the pattern of tooth eruption suggests the child was only aged about 4-5 years when they died.

This particular child had also suffered from previous episodes of disease; their leg bones, particularly the femora (thigh bones), showed marked bending most likely indicating a vitamin D deficiency rickets. We need to form vitamin D either in our skin following exposure to the sun or from our diet, oily fish and eggs containing natural sources of vitamin D. A poor calcium intake in the diet may also be an important factor influencing the onset. It’s likely that a range of factors such as poor living and working conditions, limited diets and increased air pollution during the post-medieval period contributed to cases of rickets. There were also plaques of bone formation over the inside of the cranial bones, with prominent outgrowths forming in the occipital bone at the base of the skull. The deposits were thickened and formed of a long-standing remodelled bone layer, which suggests they had survived with the cranial inflammation or non-specific infection for quite some period.

Bone destruction at the base of the tooth roots and porous new bone formation caused by infection from a dental abscess in a child’s mandible. Copyright AOC Archaeology

Skeleton Crew: A day in the life of an Osteoarchaeologist

Skeletons, but not in cupboards

SIM cards, Skeletons, and Celebrations: Our Transylvanian Day of Archaeology

A Day in the Life of a Zooarchaeologist

Counting and Sorting in the Lab

Hiya. My name is Brenna, and I’m an archaeologist, with a PhD in dead people’s teeth. You can normally find me on the twitter at @brennawalks or in tl;dr format on my blog passim in passing .

So, what gives today?

So many shiny things! Turns out archaeology really suits people with rather wide and varied interests; on any given day you might find yourself with a synchrotron smashing particles or a mattock smashing soil. In my case, I had planned to go in and look at some of my research material in the scanning electron microscope over at UCL. In my ‘real’ academic life, I study teeth, and I study them very, very close up. You could call what I do ‘bioarchaeology’ or ‘dental anthropology’ … I’m not fussy. But I study the development of teeth from people who died in the past in order to look at the record of growth that is trapped in the structure of their dental enamel. Your teeth carry chemical and physical signatures of things that happened to you during childhood, while the the teeth were growing. What I look at in particular are signs that growth shut down briefly during childhood, a condition called ‘enamel hypoplasia’.  These are (ish) grooves on your teeth that can be evidence of a childhood fever or other unhappy event. By looking at different patterns of these markers in teeth, we can compare aspects of health across different groups. Did rich kids have a better time of it than poor kids? Did sedentery agriculturalists do better as kids than more nomadic groups?

To study stuff like that, you get to do some cool science with machines that go ‘ping’ and or ‘whop’. My favorite lab machine is the gold sputter coater; it turns my tooth casts into art:

You can see a big groove in the tooth above. That’s from some sort of growth disruption episode while the kid was still a toddler. Go on, check your own teeth now. You know you want to.

Of course, I haven’t ended up in the lab at all. One of my newer interests is something called augmented reality (for an example, check out the awesome new Museum of London roman app: The Only Way is Londinium). I’m really interested in applications for public outreach (particularly web-multimedia and smart-phone based stuff) and I’m totally enamoured of anything shiny and/or techie.  So instead of being good (hey, it’s Friday!) I went and made a 3d object hover over a piece of paper. It’s a poor screen capture, but hey, I should be working on publications and actual research, right?

Check out the easy, totally free-ware possibilities though. This is brought to you by Google Sketchup running the ARmedia plugin; it’s practically idiot proof and the results are pretty cool. Anything more involved and you’re looking at developing some serious modelling skills, but who needs sleep…?

sorry about the video quality 🙂

Untitled from Brenna Hassett on Vimeo.

Dealing with the dead of Villamagna, Medieval Italy

Why Should Archaeology be of Interest to Politicians?

Behind the scenes at the Natural History Museum London