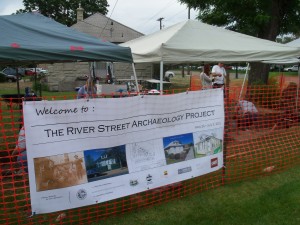 (This post was written for the Day of Archaeology 2015. It has been reposted on this website with permission. You can see the original here)

This summer, I found a greatly underestimated hotbed of public interest in archaeology. Was it a small neighborhood near Columbus, Ohio? What about Edinburgh, Scotland? Or, perhaps it was Washington D.C.?

All of those places are excellent examples of how heritage conservation, archaeology, and public interest have converged and resulted in excellent public archaeology programs. They are communities that serve as examples of what can and should happen when archaeology and modern societies collide.

However, I realized Boise, Idaho has the potential to become one of those flashpoints of engagement between archaeologists and interested publics.

Places like Columbus, Ohio, Edinburgh, and Washington, D.C. are influential locales in the public archaeology movement. Engagement between archaeologists and the public have been going for years in these places. These centers of engagement, along with the dozens of other public outreach projects, serve as lighthouses that guide other archaeologists. Archaeology is showing residents in dozens of communities how the scientific process and tidbits of history relate to modern society. Both children and adults are given the opportunity through these projects to learn how archaeologists and science play an important role in our modern world.

But, what’s happening in the rest of the world? Are archaeologists reaching out to interested publics? Are other communities interested in what archaeology can offer? Based on the abstract book for #SHA2016, I’d wager that the answer to this question is yes. Boise is one of those places.

This summer I was fortunate enough to direct the River Street Archaeology Project in Boise, Idaho. The excavation portion of this project was conducted from May to July, 2015, but the artifact analysis and reporting will continue until December, 2015. The archaeological fieldwork builds upon earlier research conducted throughout 2014 that was featured in last year’s Day of Archaeology.

On the actual Day of Archaeology I will be working on the artifact cataloguing in my garage in Tucson. Even though it will probably be over 100 degrees out there, I feel a duty to report on this project as soon as possible (Okay, okay. I’ll probably move the artifacts into my house somewhere once the mercury tops 90 degrees. I mean, who can work in that heat? Besides every archaeologist between 30 degrees latitude.)

Even though fieldwork for the River Street Archaeology Project ended in early July, it is still a great candidate for the 2015 Day of Archaeology because it was so well received by the public and was a vehicle for teaching the community about the history that lies beneath their feet. This project was truly a local collaboration:

The wealth of attention in the media and warm reception from the local community sent a very clear message: the City of Boise really cares about archaeology.

This video is dedicated to Mrs. Erma Hayman, who passed in 2006, and all the volunteers, students, and professional archaeologists who helped make this project possible. In the course of six weeks, five archaeologists managed an army of 54 volunteers who donated nearly 1,200 hours of work. Also, we would like to thank the hundreds of people that visited the site while we were out there digging. 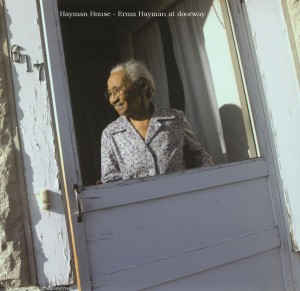 The River Street Neighborhood was created in the 1890s as a place where working class Boiseans could call home. By the 1920s, dozens of modest homes lined the streets in this area. A close-knit enclave of Basque, Japanese, African Americans, and Euroamericans created what would be the most diverse part of Boise.

Over time, this place has been almost completely transformed by road realignments, urban renewal, and real estate development. Very few of the 100+-year-old houses remain. The Erma Hayman House at 617 Ash Street is unique. Built in 1906, it has actually stood the test of time (probably because it is the only building constructed of locally quarried sandstone blocks and had the same occupant for nearly 70 years). This house is named for Erma Hayman, an African American that bought the house in 1948 or 1948 with her husband. She raised her children and some of her grandchildren in that house for over 60 years. After a long and fruitful life, Mrs. Hayman passed away in 2006.

Archival research, oral histories, and historical map research conducted in 2014 suggested a wealth of archaeological data may remain on the block that surrounded Mrs. Hayman’s home. It was possible that the first Basque handball court in Boise (called a fronton) may still remain along with other house foundations, outbuildings, and other archaeological features. That information got us excited, but just because a map shows you there might be archaeology does not mean there actually will be archaeology. Digging is the only way to find out.

This information shaped our research design and guided our questions. In anticipation of a possible archaeology project, the long-time Boise residents were asked about the types of questions they’d like to see addressed by the dig. The African American community was particularly interested in knowing more about what it was like to be black in Boise before the Civil Rights Movement. Euroamericans simply wanted a chance to talk about their life in the neighborhood because nobody had ever asked them about their experiences living in a place characterized as “The Black Neighborhood.”

Because River Street is developing so quickly, it was paramount that we acted as soon as possible. In another 5 to 10 years, all the archaeological data on this block could have been lost. In late 2014, the main property owners on this block (the Capital City Development Corporation of Boise and the Boise Department of Parks and Recreation) were asked if an archaeology project could be held on their property. The plan was to host a field school through the University of Idaho that had a strong public archaeology project.

Permission to excavate was granted in early 2015. The field school was on.

What did we want to do?

The primary goal of the River Street Archaeology Project was to show students and interested members of the general public the role of archaeology in contemporary society. The project was designed to use archaeology and ethnography to collect as much information as possible. Both excavation and oral history interviews were conducted at the site. We wanted to teach people how to dig, but we also wanted to:

As soon as we were granted permission, the field school was advertised to college students at the University of Idaho and College of Western Idaho. A crew of graduate students was assembled to manage the volunteers who were assuredly going to show up. Building upon the existing digital history project, a research design was created along with a packet of weekly readings on public archaeology.

From May 24th until July 3rd, we worked outside 5 days a week in the River Street Neighborhood. The length of this project allowed a large number of students and professors to come by the site and see what we were doing. Local college students came from all across the state of Idaho in order to experience an urban archaeology project. Volunteers, many of whom had already attended archaeological field schools or other public projects in the past, also came to the site to keep their trowels dirty. Parents brought their kids to dig. Young aspiring archaeologists got their first chance to dig an excavation unit. Retirees found something to do with their time. Even homeless people came to volunteer at the site. The fieldwork was truly inclusive.

The project also attracted former residents who used to live in the neighborhood and wanted to share their memories with us. Our research questions and results have been tempered by oral histories recorded in 2014 and the ones we captured this summer. This resulted in the recordation of over 6 hours of oral histories.

Word of the project was spread through the local mainstream media which brought hundreds of local Boiseans to us. Most heard of the project on the news and simply to see real archaeology in action.

What did we accomplish? 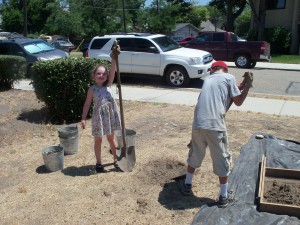 It is too early to know what this project’s impact will be on the people of Boise. It is the third in a series of public archaeology projects in the last 5 years that have garnered an estimated 2,200 visitors (FYI: Boise’s population is about 220,000, which means about 1% of all Boiseans have visited these public archaeology projects). The widespread acceptance of this project by the people of Boise is truly commendable.

The River Street Archaeology Project was the largest public archaeology project in Boise. It also focused on the only African American site in the city and discovered archaeological materials from the turn of the twentieth century, which was a very formative period in Boise’s history. We were able to teach archaeology while learning from the many people that selflessly made this possible. With luck, we have set the stage for many more public archaeology projects in the future. 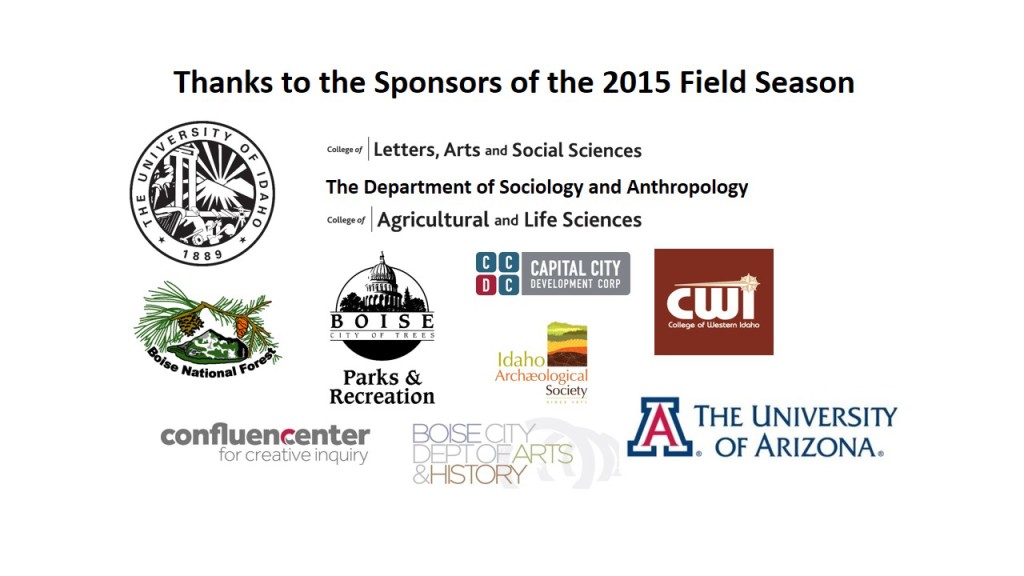 The list of people I need to thank would be longer than this blog post. The 2015 project was funded by the Department of Sociology and Anthropology in the College of Letters, Arts, and Social Sciences at the University of Idaho, the School of Anthropology and the Confluencenter for Creative Inquiry at the University of Arizona, and the College of Western Idaho Anthropology Program. Access to the property was granted by the Capital City Development Corporation and the Boise City Department of Parks and Recreation. A wealth of other individuals and agencies also donated time, materials, or expertise to make this project happen. I apologize if I did not mention you each by name.

Most importantly, I would like to personally thank every volunteer, visitor, professor, archaeologist, and student that came by the site. This project would not have been as successful as it was without you.

And, make sure you keep pushing for more public archaeology projects and outreach from existing projects. A mountain of information is lying at your feet as you walk through Boise and any other city in the world. This is your heritage. Make sure you stay informed of what exists in your city. Make sure you have a chance to participate in the archaeology that is happening in your own back yards.

A Day at the Brodsworth Project 2015

Crafting Stories of the Past: Strathearn Environs and Royal Forteviot (SERF) project 2015

Day of Archaeology 2015 | Catching up with the past

View all posts by Bill White →

Bill White has written 1 articles on Day of Archaeology